The Wyland Foundation and Celebration of the Sea Foundation announced they have joined into a new partnership during a press conference held at Miami’s iconic Marine Stadium on Sunday, October 16 at 2:00 p.m. The event was held during Miami’s annual signature event, the Coconut Grove Seafood Festival which attracts more than 15,000 people annually. This year the festival featured a new “Eco-Discovery Zone” which was created and produced by the Celebration of the Sea Foundation to engage and educate children and families about pressing environmental issues in South Florida. The press conference, hosted by internationally renowned marine artist and founder of the Wyland Foundation, Wyland along with Celebration of the Sea Founder & CEO, Patxi Pastor, included local civic leaders and community officials.  The announcement was made prior to the start of ceremonies for the presentations of the Celebration of the Sea Awards that afternoon. The Celebration of the Sea awards recognize excellence and achievements in environmental education, advocacy and stewardship as well as initiatives that foster career paths for STREAM (Science, Technology, Recreation, Engineering, Arts and Math) along with outstanding contributions to eco-tourism, the diving industry and promoting sea level rise awareness among the public. 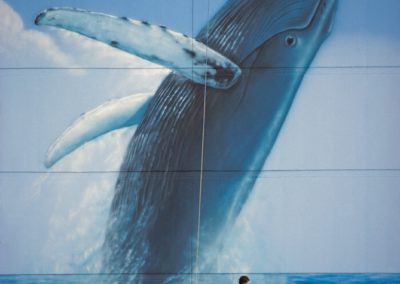 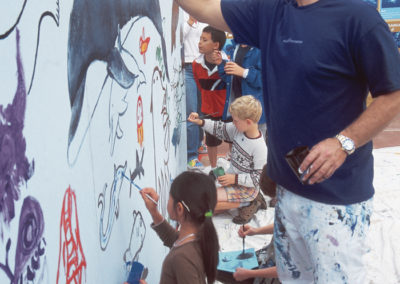 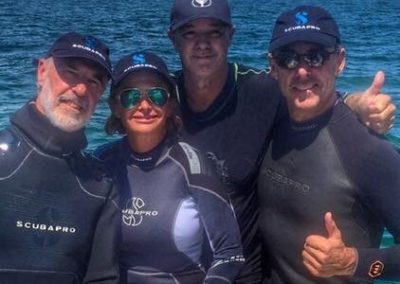 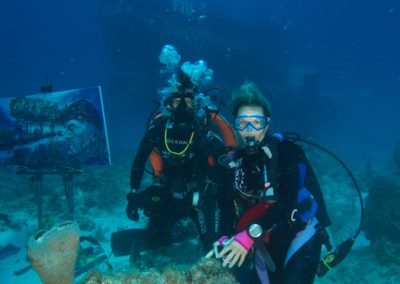 The press conference which was sponsored by Primecard, Coca-Cola, SCUBAPRO™ and Ocean Safari Diving Adventures concluded with a live underwater video and audio feed from the DEMA (Diving Equipment Manufacturers Association) spectacular 15,500 gallon “Go Dive Now Pool” sponsored by The Cayman Islands.  The press conference featured Wyland painting on SCUBA with Celebration of the Sea Foundation Founder and CEO, Patxi Pastor and Executive Director, Annette Robertson along with Miami-Dade School’s MAST@FIU Principal, Dr. Matthew Welker and MAST@FIU senior, Andres Martinez. The group painted rain barrels underwater that were donated by Coca-Cola™ to the Celebration of the Sea’s Eco-Link™ Program that promotes the arts in schools along with environmental and marine science education. The rain barrels are part of part of Eco-Link’s fresh water conservation programs being implemented in South Florida schools.

Wyland recently finished painting spectacular, large-scale “Whaling Wall” murals in 100 cities around the world. Wyland stated, “We are thrilled to be partnering with Celebration of the Sea and collaborating on so many exciting levels between our Foundations. Having a collaboration like ours with Celebration of the Sea and the Eco-Discovery Zone that so directly engages and inspires children and families to appreciate and protect the oceans and the animals that call it home is critically important.”

“Wyland truly represents the ideal role model in environmental stewardship and education for children and families around the world,” says Patxi Pastor. Among numerous other recent large-scale public events, Pastor recently served as executive producer and co-creator of “A Time to Start Thinking Differently – The Economic Impact of Sea Level Rise on South Florida,” a series he co-hosted and produced for the Miami Beach Chamber of Commerce and more than 100 leading South Florida business leaders.

“With the arts continually being cut so dramatically from budgets and in many cases removed altogether in school systems around the country, this has become a critical issue to support. The arts represents so much more to society than simply a means of illustrating science. Through the example of Wyland’s passion and artistic gifts, the public and especially children are directly touched and inspired: They are excited to begin focusing on all the science, critical thinking and problem solving that is urgently needed to develop successful future strategies in our communities for our pressing environmental challenges,” says Pastor.

“I am honored to receive the Celebration of the Sea Award for Outstanding Contribution for Sea Level Rise Awareness at this event,” said Miami Beach Chamber of Commerce Chairman Wayne Pathman, Co-Founder and Managing Partner of Pathman & Lewis, LLP. In addition to his new role as chairman for the Chamber, Pathman also serves as chair of the City of Miami’s Sea Level Rise Committee and continues to be a nationally featured speaker on the topic. “Going forward, supporting arts and environmental education clearly needs to be a priority for the entire business community and all of South Florida’s business leaders. It’s events like this one with Wyland and Celebration of the Sea that provide an effective and actionable example of how to finally start achieving these goals.”

About The Wyland Foundation

Founded by renowned environmental artist Wyland, the Wyland Foundation has helped children and families around the nation to rediscover the importance of healthy oceans and waterways through public art programs, classroom science education, and live events. The foundation gives children the tools they need to become more creative, positive, and solution-oriented. The foundation is a 501(c)(3) non-profit organization and has worked directly with more than one million children since its inception in 1993.

About The Celebration of the Sea Foundation

The Celebration of the Sea Foundation is a Florida-based 501(c)(3), not-for-profit organization, dedicated to producing engaging, entertaining and educational programs for children and families with a specific focus on the world’s oceans and marine habitats. The Foundation’s primary activities are centered on STREAM (Science, Technology, Resiliency, Engineering, Arts and Math) and designed to raise public awareness, particularly among children, of both aquatic and terrestrial ecosystems while simultaneously helping to instill a sense of stewardship towards the animals that inhabit them. The Foundation’s programs focus on ways in which each of us can make a positive impact on the environment while placing specific emphasis on the world’s ecological systems.